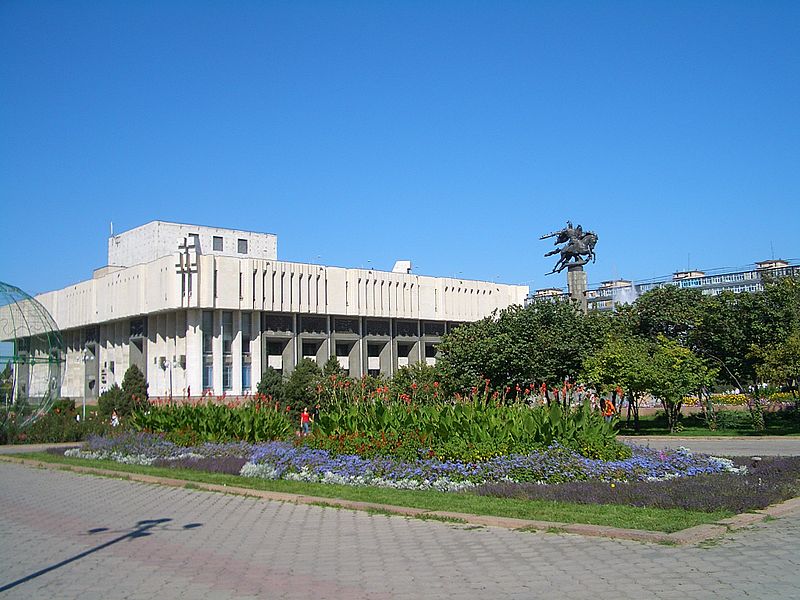 Inside the Kyrgyz State Philharmonic Hall there are two concert rooms. The large main room and a smaller concert room on the upper floor, where the only pipe organ in Bishkek is housed.

The square in front of the Music Hall is a meeting spot for pedestrians and the students from the near by university.

Around the base of the Mans statue are statues of Manas’s wife Kanykei, and the famous manasci Bakai, his spiritual advisor, as well as busts of famous manaschi, who knew and recited the Epic of Manas.

The Bishkek Philharmonic Hall and the Kyrgyz Opera and Ballet Theater are the two main venues for classical music performances in Bishkek.

The Kyrgyz National Philharmonic is named after Toktogul Satylganov. Satylganov was a composer and virtuoso musician. He was the most famous of the Kyrgyz Akyns – improvising poets and singers. The Kyrgyz town of Toktogul in the Jalal-Abad Region is also named in his honor.

Wikipedia describes: Toktogul was an akyn, an improviser and poet who set his words to music. He was one of the most influential figures in traditional Kyrgyz arts, and is considered one of the founders of modern Kyrgyz literature.

Other names of the Philharmonic Hall in Bishkek

The Philharmonic Hall often is also referenced by these names: