The opera house in Bishkek is one of the landmarks opposite the Fine Arts Museum and next to the Hyatt-Regency Hotel. The venue hosts local and international opera and ballet presentations as well as occasional classical concerts and other musical and artistic events. There are permanent opera and ballet groups in the theatre, and also established cooperation with the visiting teams. The season usually lasts from fall to late spring, but there are performances at other times of the year.

The Bishkek Philharmonic Hall and the Kyrgyz Opera and Ballet Theater are the two main venues for classical music performances in Bishkek.

The various names of the Opera in Bishkek

The Opera in Bishkek is mentioned by many different opera names:

The official website of the Bishkek Opera house uses the name Кыргызский национальный ордена В.И.Ленина академический театр оперы и балета имени Абдыласа Малдыбаева which translates literally into Kyrgyz National Order of VI Lenin Academic Opera and Ballet Theater
named after Abdylas Maldybaev, but of course this is not really used when talking to someone.

The transcription of the opera’s address also sometimes causes confusion. Sometimes it is sunscribed as Abdrahmanov Street and sometimes as Abdrakhmanova Street.

History of the Opera and Ballet Theater

The history of Bishkek’s Opera and Ballet Theater began 1926 with theater artist beginning their training in what they called the Kyrgyz national studio. Four years later in 1930 the Kyrgyz State Theater was established. Six years later it was reorganized into the Kyrgyz musical theater.

In 1937, the first musical drama “Altyn kyz” (“The Golden Girl”) was staged for the music of Vladimir Vlasov and Vladimir Fere, according to the libretto by Joomart Bokonbaev.
With the release of the play “Altyn kyz” in the season of 1936-1937, the dramatic theater is transformed into a musical-dramatic theater. In 1938, the second musical drama “Azhal Ordun” (“Not Death, Life”) was released, already co-authored by Abdylas Maldybaev, Vladimir Vlasov, Vladimir Feret, on the libretto of Zhusup Turusbekov.

In the year 1939 the Kyrgyz Musical Theater of Opera and Ballet was awarded the Order of Lenin – the highest civilian decoration bestowed by the Soviet Union.

The order was awarded to:

As times changed, so did the name of the Opera and Ballet theater in Bishkek. In 1942 the opera was renamed to the Theatre of Opera and Ballet and 1959 the musical theater was awarded an academic status.

In 1955 today’s modern opera building, build by the architects L. Laburenko and P. Ivanova, became a new home for the theater.

Since 2000, the opera was seen as a “National” institution and referred to as Kyrgyz national theater of opera and ballet.

Opera and ballet named after A.Maldybaev

Since 1978, the musical theater was named after a composer and a national artist of the USSR: Abdylas Maldybaev.

Abdylas Maldybaevich Maldybaev was born 1906 and lived until the year 1978. Maldybaev was a Kyrgyz composer, actor, and operatic tenor singer. Today he is still known as one of the composers of the state anthem of the Kirghiz SSR as well as his own operatic composition.

Maldybayev provided folk melodies and composed music which was organized and prepared by Russian composers Vladimir Vlasov and Vladimir Fere into six Soviet state opera and other works. 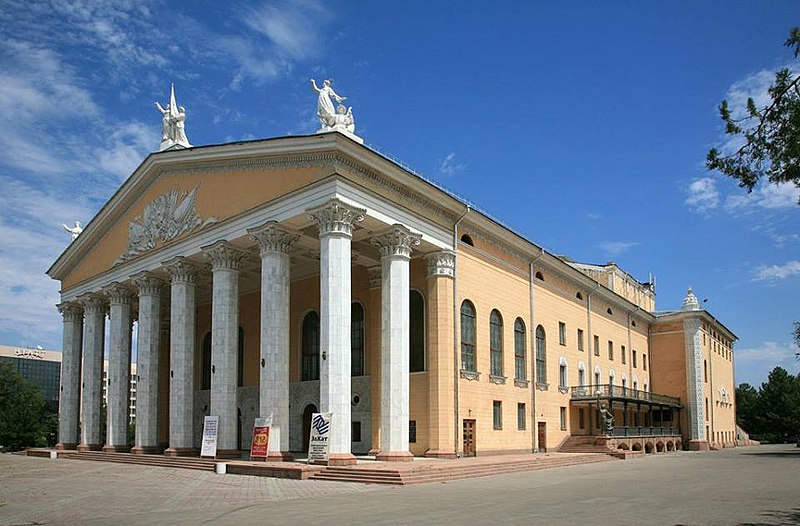 The opera house in Bishkek is one of the landmarks in Bishkek. The venue hosts local and international opera and ballet presentations as well as occasional classical concerts and other musical and artistic events. There are permanent opera and ballet groups in the theatre, and also established cooperation with the visiting teams. The season usually [...]

Address of the venue Kyrgyz Opera and Ballet Theater Bishkek

Geo-Coordinates of the venue Kyrgyz Opera and Ballet Theater Bishkek