Exhibition room of the Kyrgyz National Museum of Fine Arts featuring the famous painting Daughter of Soviet Kirghizia’ from 1948 painted by Semyon Chuikov.

The basis of the museum collection were 72 works of Russian artists. Today the Gapar Aitiev Museum of fine arts is also the venue of many contemporary exhibitions. To date, the museum collection has about 18 thousand items in storage. The structure of the collection is based on the types of fine arts – painting funds (about 4 thousand exhibits), graphics (about 9600), sculptures (about 1 thousand), arts and crafts (more than 3 thousand).

The pearl of the museum collection is a collection of Kyrgyz arts and crafts. It shows the diversity of species, all the most characteristic and significant: embroidery, felt products, woodcarving, patterned weaving, embossing on the skin, jewelry.

Kyrgyz folk art developed on the basis of centuries-old traditions, it reflected aesthetic standards and criteria, it found its creative expression of the people’s love for the beautiful.

The museum collection of works of Kyrgyzstan’s artists allows you to evaluate the development of the local art culture. It reflects the formation of a national school and it covers all stages of the development of professional visual arts.

The museum is open to visitors Tuesday to Sunday from 10:00 to 18:00h without a break.
The ticket office closes at 16:30h
The museum is closed on Monday’s and on the last Friday of the month for Cleaning Day.

The museum is located on Abdrakhmanov Street, which by many locals is still referred to as Sovietskaja Street. It is located directly opposite of the Kyrgyz Opera and Ballet Theater and North of the Library.

History of the Department of Painting

The picturesque collection began to be formed and completed one year before the beginning of the museum – in 1934 – when from the State Tretyakov Gallery and the People’s Commissariat of the RSFSR came a large premise of 72 paintings selected by SA. Chuikov.

All subsequent years the collection was replenished from the exhibition funds of the Ministry of Culture of the USSR and the Union of Artists of the USSR. There have been numerous contributions from the State Tretyakov Gallery, the State Hermitage Museum, the Pushkin Museum of Fine Arts. Pushkin, the Museum of Oriental Art, acquisitions from private collections, authors and heirs.

Beginning at the 1st Republican Art Exhibition in 1934, the museum regularly receives works by artists from Kyrgyzstan.

Funds of the painting department number more than 3800 units of storage and make up the following sections: Western European painting, Russian and Soviet art, painting artists of Kyrgyzstan.

The largest section is the collection of Kyrgyz painting. All the periods of the historical, spiritual and cultural life of Kyrgyzstan were most fully reflected in it.

The founder of Kyrgyz painting SA. Chuikov is represented by 90 works, among them small etudes dating from 1917-1919, parts of the famous “Kirghiz kolkhoz suite”, some of the best landscapes of Kyrgyz painting “Autumn Jailoo” and “Touching Eternity”. V.V. The samples are presented by 17 works, that is all that has been preserved. The first national painters G. Aytiev and S. Akylbekov – 134 and 159 – respectively. And so on – until 2001 the most significant and interesting works came in the collection of paintings of the People’s Commissariat of Education.

Russian painting. The collection contains 24 icons, the earliest of which is “The Savior Not Made by Hands” dates from the 17th century. Painting of the XVIII-XIX centuries is represented by great names, such as D.G. Levitsky, V.L. Borovikovsky, OA Kiprensky, A.A. Ivanov, I.K. Aivazovsky, the largest Wanderers – N.N. Ge, I.E. Repin, V.I. Surikov, A.K. Savrasov, representatives of various artistic trends of the turn of the XIX-XX centuries – P.P. Konchalovsky, R.R. Falkom, B.M. Kustodiyev, K.A. Korovin, P.V. Kuznetsov and many others.

Western European painting is very small and represented mainly by the works of unknown authors, but among them there are authentic masterpieces such as the “Female Portrait” of the unknown French artist of the 16th century Clouet circle, small pictures of sketches by Dutch and Flemish masters. 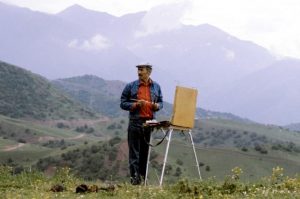 The Kyrgyz National Museum of Fine Arts was named after Gapar Aitiev.

Aitiev was born 1912 and became one of the first professional Kyrgyz artists. The painter followed the classical Russian tradition of landscape painting and got inspired by Kyrgyzstan’s amazing beauty.

As q national artist he also observed his times and created images in the aesthetic perception of various life phenomena. He kept a deep connection with the spiritual culture of the Kirghiz people.

Aitiev was born September 28, 1912 in the village of Tuleiken, which is not far from Osh.

The Kyrgyz National Museum of Fine Arts named after Gapar Aitiev is the main artistic treasury of Kyrgyzstan. Today the Gapar Aitiev Museum of fine arts is also the venue of many contemporary exhibitions. To date, the museum collection has about 18 thousand items in storage. The structure of the collection is based on the [...]

Address of the venue Museum of Fine Arts Bishkek

Geo-Coordinates of the venue Museum of Fine Arts Bishkek